It’s no secret how much we like the young Maryland stallion Blofeld, and you’ve seen us mention multiple times probably that his first crop so far contains 14 winners from his first 14 runners (out of just 24 foals in his first crop)- an absolutely outstanding statistic.  With these first runners suggesting that Blofeld might be a sire on the rise, we have booked several mares of our own to Blofeld this year, and have recommended him to numerous Mid-Atlantic-based clients for their mares.  One of those mares heading his way on our recommendation is the stakes-placed 2YO Group Text.

Blofeld was an unbeaten graded stakes winner at 2YO, the first graded winner for his sire Quality Road, who is now among the elite stallions in the country.  Having said that, although Blofeld himself was a precocious 2YO and had most of his success at 2, he’s proving that he might be a bit more of a later-developing influence based on these first crop results.  So the fact that Group Text was a debut winner at 2, stakes-placed in her second start and an allowance winner in her third start at 2, will hopefully add a bit of precocity to their foal.

TrueNicks rates this Elusive Quality/Broad Brush cross as a “B” with a pair of stakes winners bred this way from limited attempts.  We also like that Group Text’s own broodmare sire, the G1-winning 2YO Stormello, is by Stormy Atlantic, who is also the sire of Gators N Bears, the broodmare sire of Blofeld’s black-type runner Beach Daze.  Because Blofeld himself is out of a Storm Cat mare, that means this foal will be 3×5 to Storm Cat, but again, this is a pattern already working for Blofeld (who has another debut winner to his credit out of a mare by Storm Cat, and thus inbred 3×2).  We also like that Group Text’s second dam is a stakes winner by Clever Trick, and he appears in the pedigrees of the dams of a couple of Blofeld’s winners already, including the highly thought-of allowance winner Goldenize.

Physically, Blofeld is a long, leggy horse with plenty of substance, while Group Text is more medium-sized but plenty stout.  So they should work well together being not that differently-made, and we can’t wait to see their foal tearing up Maryland tracks starting as a 2YO in 2025! 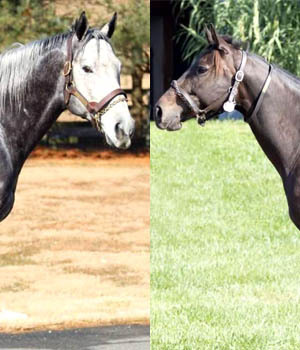