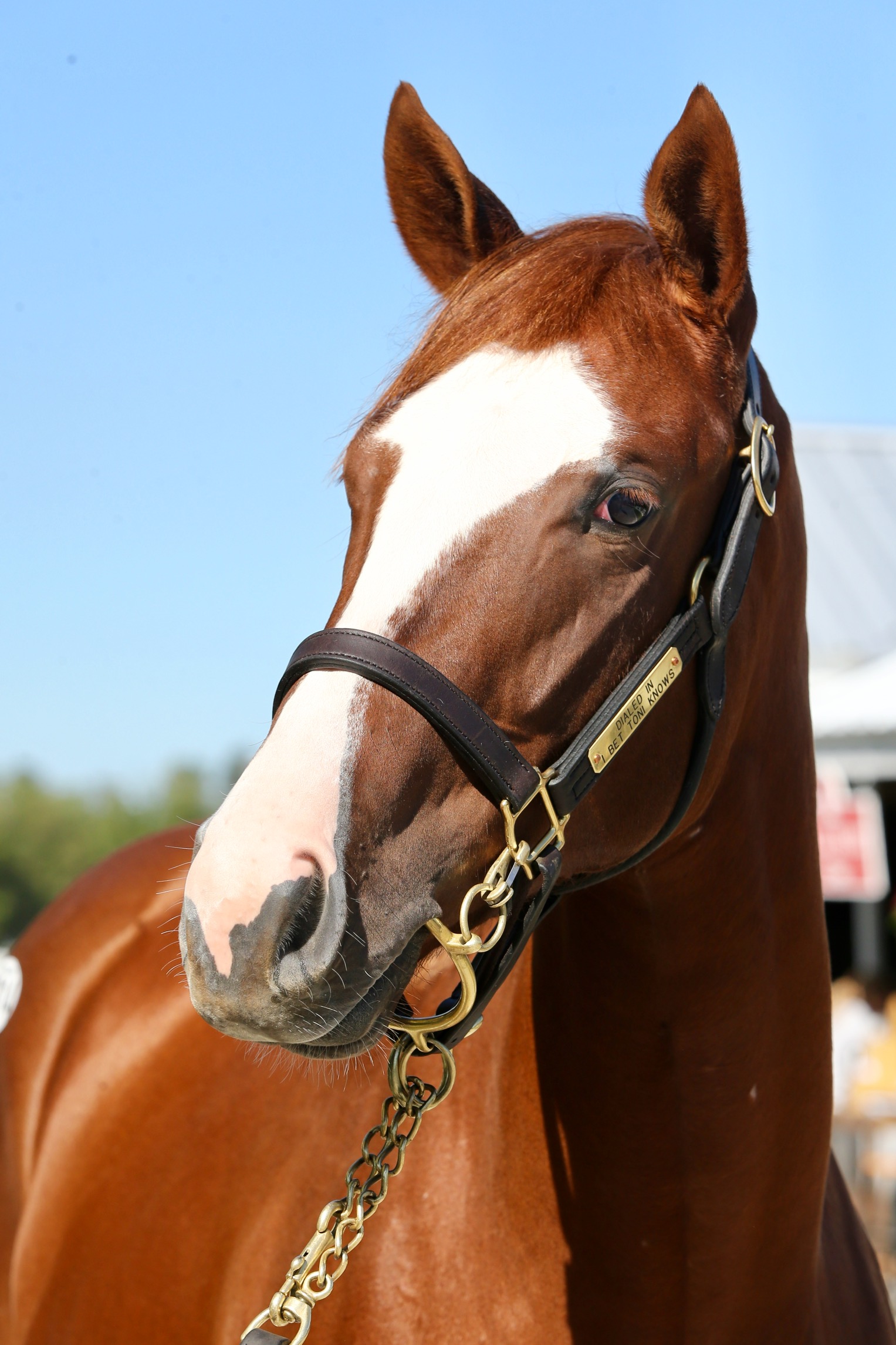 I Bet Toni Knows, by Sunriver

This amazing filly was recently purchased in a 50/50 partnership with Franklin Avenue Equine at the Keeneland 2020 Yearling Sale.

For the Wasabi Ventures Stables safety net, we will put her value at $35,000 as a straight broodmare prospect.  This is a figure we will put on her if we still have her at the end of her racing career.

This Kentucky-bred, Dialed In filly has a lovely conformation and vetted perfectly clean by our team.

The horse has already moved to Mason Springs in South Carolina for training.

NOTE on PRICING:
Per our program, the horse was purchased at auction for $110,000 (in a 50/50 split with our partners Franklin Avenue Equine).  There were also $1,100 in auction expenses (vetting and research expenses)

Hip 1814 is a gorgeous yearling filly by Dialed In, out of the broodmare I Bet Toni Knows. Dialed In himself is a strong, somewhat underrated Kentucky stallion who stands for $20,000. On the track, Dialed In won the G1 Florida Derby in spectacular, late-running fashion. He is the sire of $5.5M earner and multiple graded stakes winner, Gunnevera, who competed at the sport's highest levels from ages 2 to 5.

This filly's dam, I Bet Toni Knows, is a stakes-winning daughter of Sunriver. In just 7 starts, I Bet Toni Knows won 3 times (including on debut at Aqueduct) and earned $128,980 on both dirt and turf before concluding her career. In June of her sophomore year, she conquered the New York Stallion Cupecoy's Joy Stakes by a widening margin. Remarkably, she has proven herself to be a stronger and more capable broodmare than she was a racehorse. From just two foals to start, both have been winners. Her first filly by Scat Daddy, named Toinette, is a still-active multiple graded stakes winner of over $580,000. With 13 career starts under her belt, Toinette counts victories in the G2 Goldikova, G3 Edgewood, G3 Autumn Miss, G3 Wilshire, and the Swingtime Stakes as part of her already impressive resume. Furthermore, I Bet Toni Knows is poised to continue her success as a broodmare. In recent years she has been bred to stallions like Audible and the undefeated Triple Crown winner, Justify. She most recently sold for $375,000 with this Dialed In filly in utero at the 2018 Keeneland November Sale. Hip 1814's second dam is the Mr. Greeley mare, Ibetyouwishyouknew. In addition to producing stakes-winner I Bet Toni Knows, she is the dam of 4 other winners from 4 starters, including the multiple stakes winner, Possessed. A gelding son of Posse, Possessed won two separate editions of stakes in the New York Stallion Series (at Aqueduct and Belmont) before retiring with $212,075 in earnings. Each of Ibetyouwishyouknew's foals has been a strong competitor on the racetrack, with an average of $117,000 in earnings and an average of 22 starts apiece.

Based on her family's proclivities, this filly would be expected to perform best at around a mile or longer on the dirt. However, she certainly has enough pedigree on her dam side to suggest that she could perform well on the turf as well. 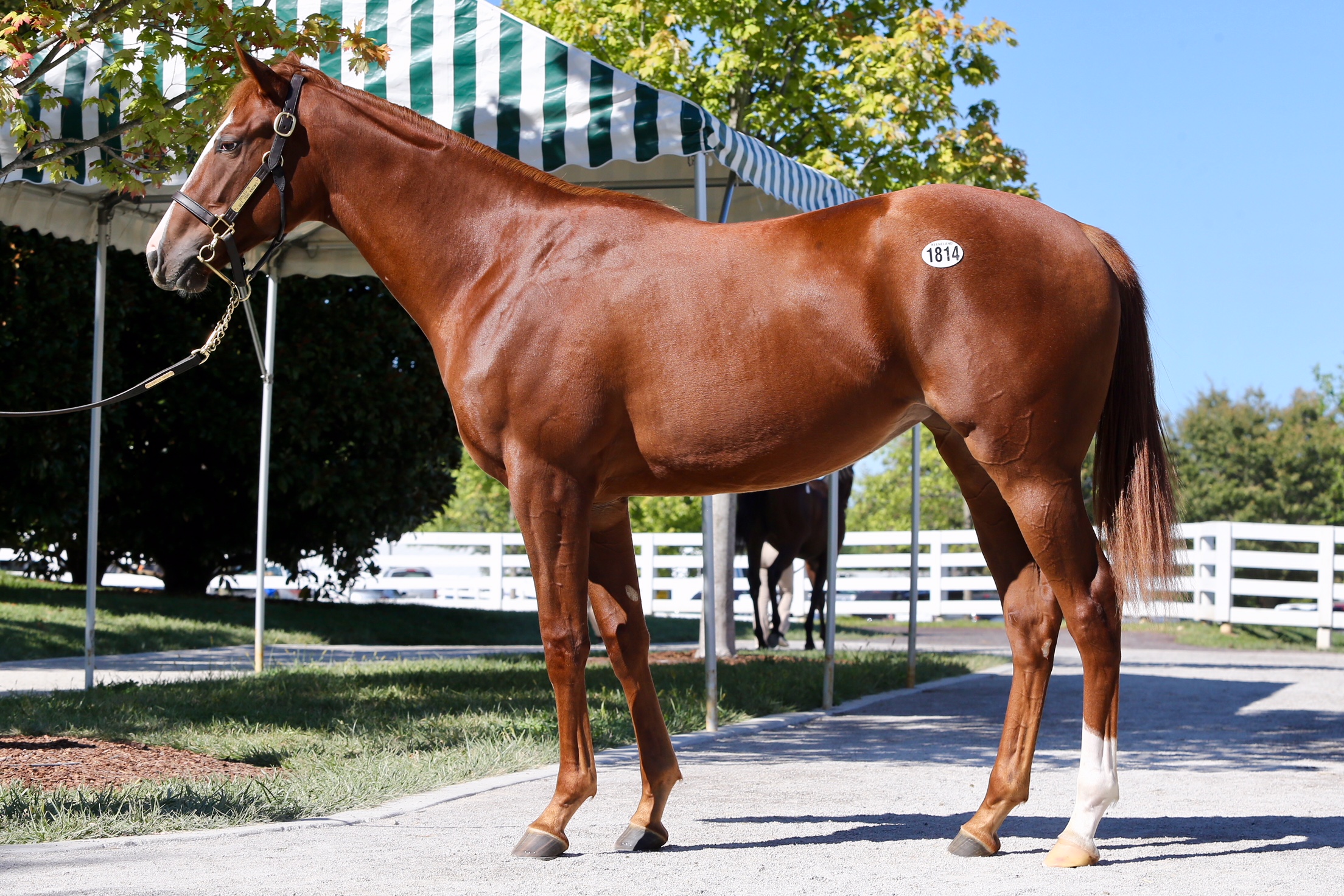 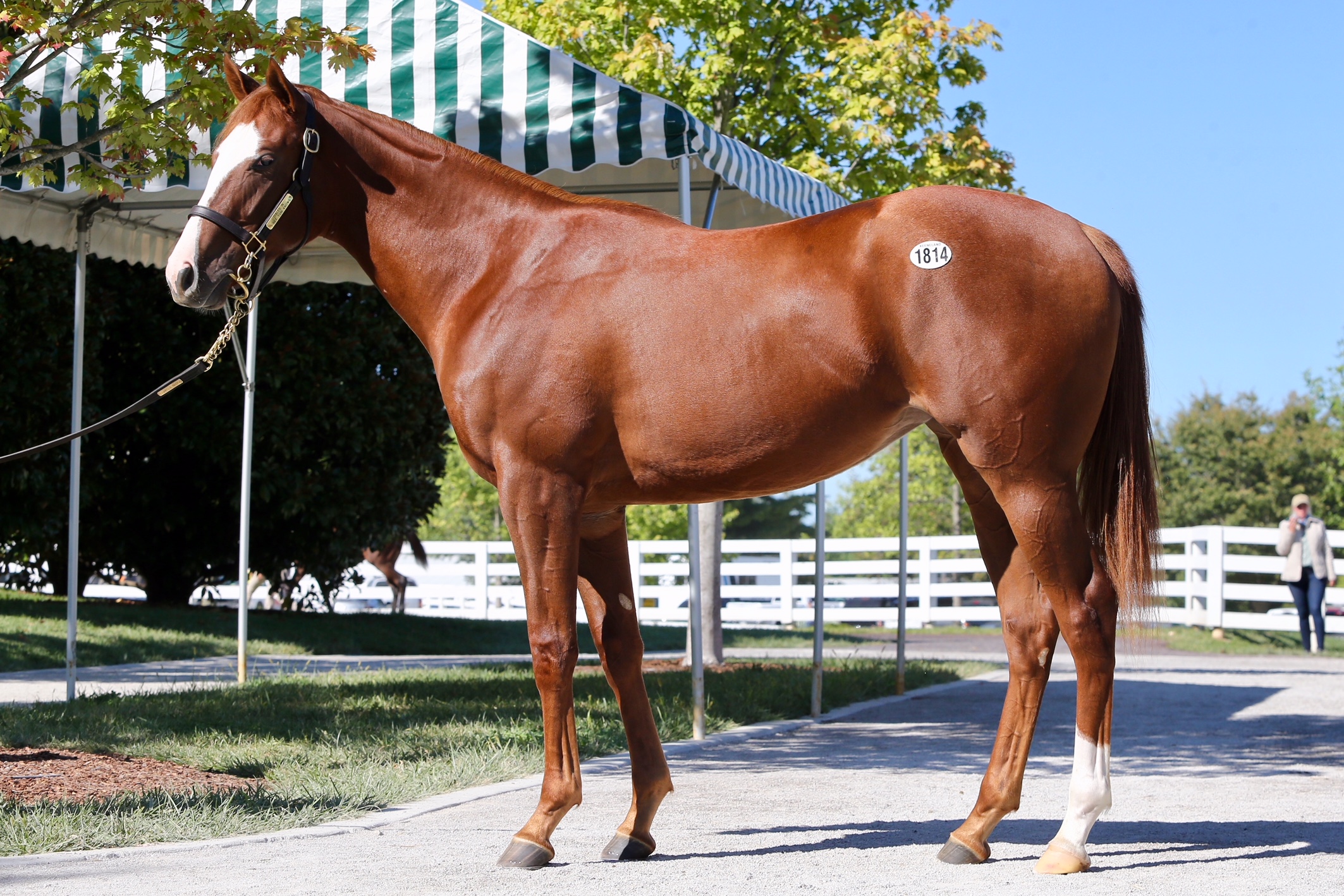 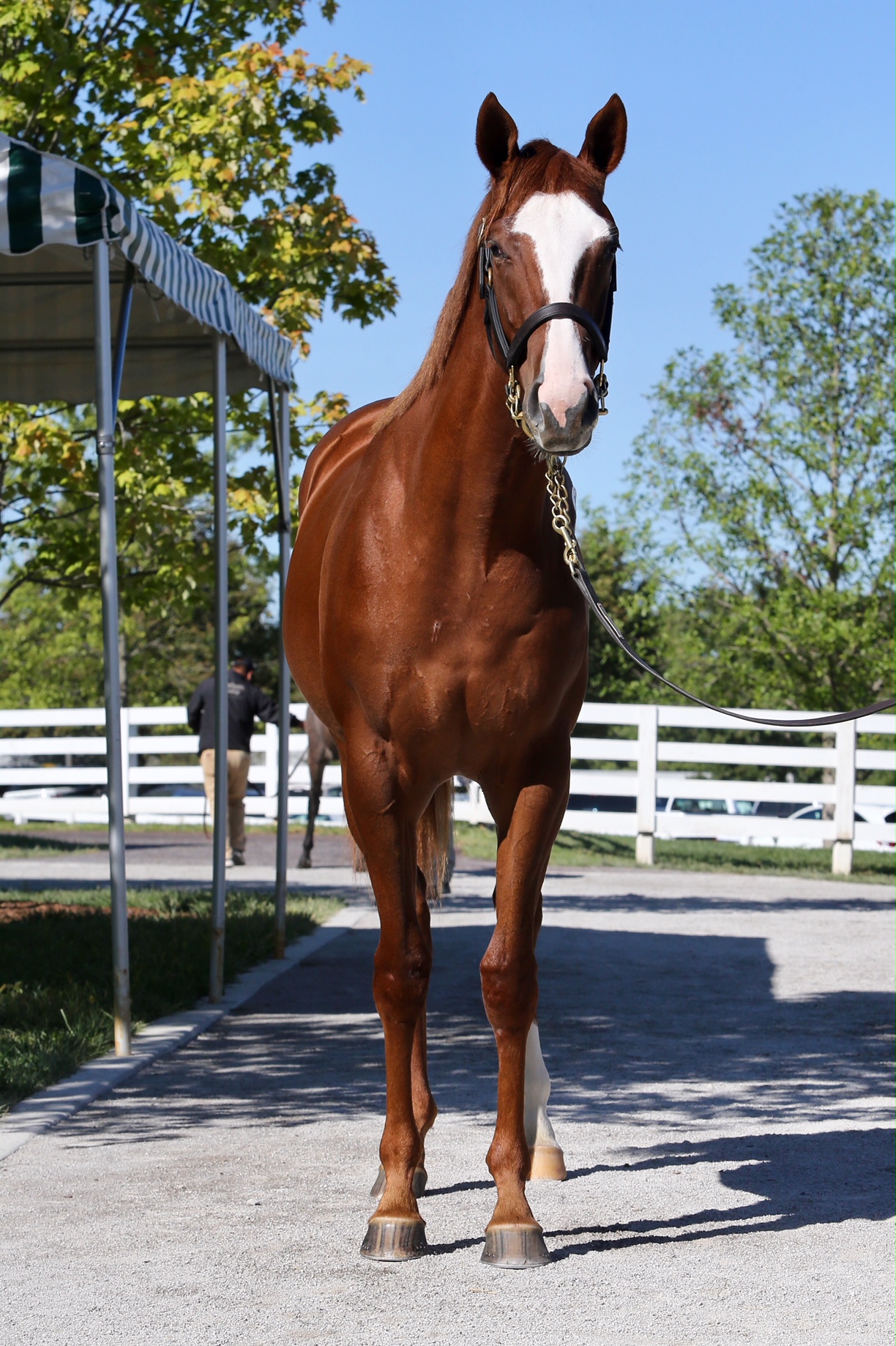 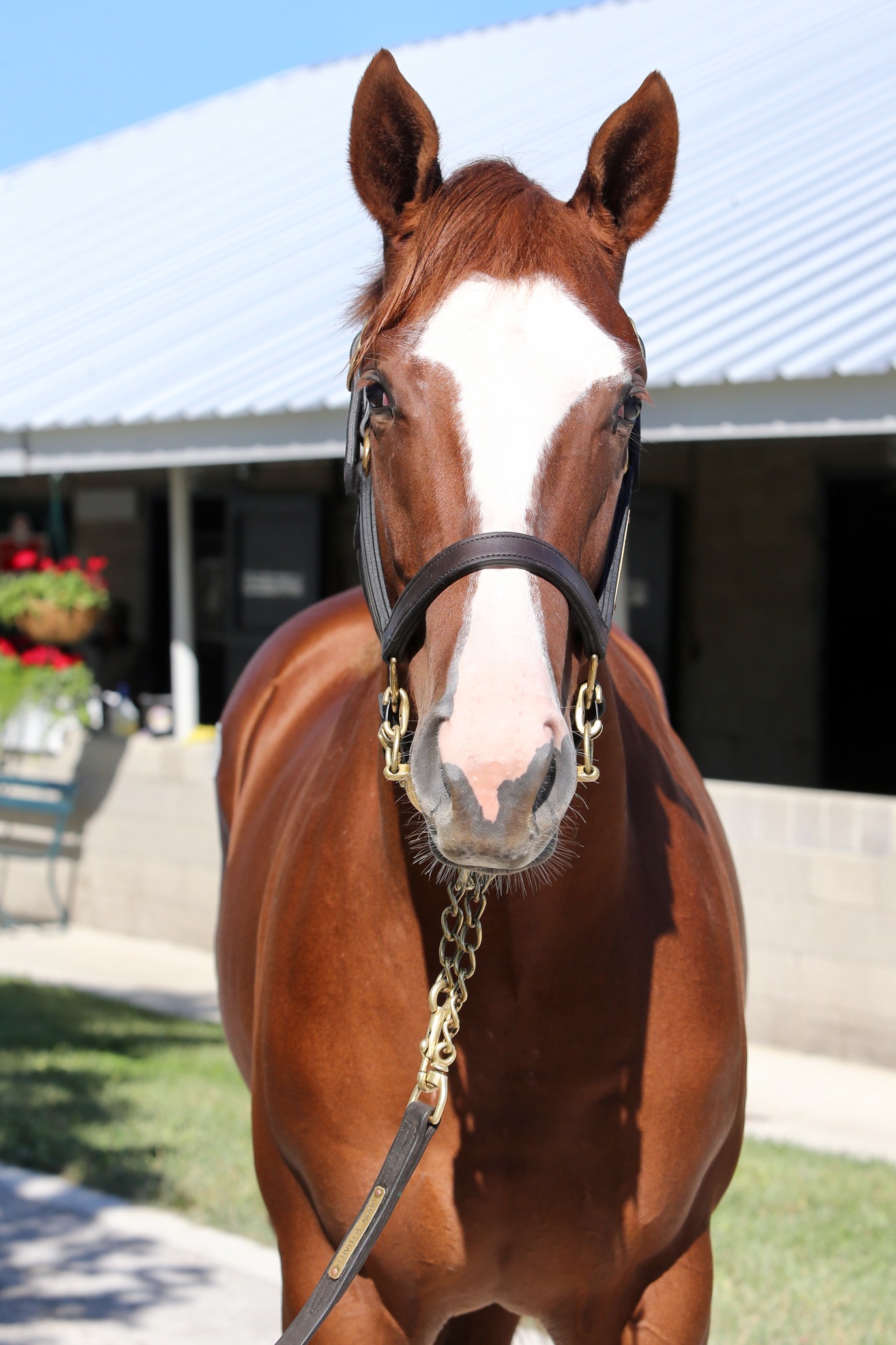