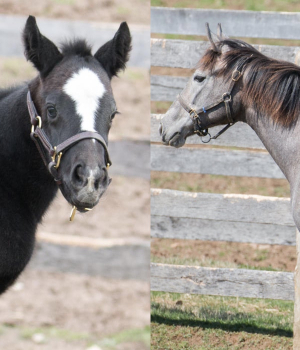 UPDATE 4/30/21: Miss Charlotte succumbed to a severe case of colic late last night. Her foal, Mascarpone, has bonded with a nurse mare.

UPDATE 3/21/20: Miss Charlotte gave birth to a filly by Include, who we've nicknamed Macallan.

Miss Charlotte is a strapping, strong mare very much in the mold of her Maryland-based sire Two Punch (from her gray/roan color, to her square head and powerful build).  She comes from a deep, black-type filled female family that traces back to the Blue Hen mare Rare Perfume.

Miss Charlotte raced exclusively as a 3YO, putting together a record of (10) 2-1-3 that season, for earnings of $51,609.  Both of her victories came at 6 furlongs, including a maiden special weight by 5 lengths at Penn National.  She was purchased in-foal to Kentucky mainstay Include on a mid-April cover, with what will be her third foal -- her first will be a 2YO of 2020.

Miss Charlotte is a half-sister to three other winners from all of her dam's foals to race.  Her dam is the multiple stakes winner Petunia, who also placed in a pair of Grade 3 races at 2 and 3YO.  Petunia is by Kentucky Derby winner Lil E. Tee, and is a half-sister to the multiple stakes winner Somethinaboutbetty (also the dam of two black-type 2YOs, including 2019 stakes-placed winner Something Super), and to winner But For Money (the dam of multiple Grade 3 winner and Grade 1-placed Eskenformoney).  Their dam, Here Comes Betty, is by Cox's Ridge and out of the multiple Grade 3 winner Betty Lobelia, who is inbred 5x4 to the aforementioned Rare Perfume.  Betty Lobelia's other daughters have produced the likes of Grade 1 winners My Trusty Cat and Include Betty, and she is herself a half-sister to the Grade 2 winner and producer Crowned.

Miss Charlotte's first foal is a 2018 filly by Mosler who will be campaigned locally, while her second foal is a lovely colt by Fed Biz.

Currently, Miss Charlotte is pregnant on an April 18th cover to the proven veteran Kentucky stallion Include, who has gotten as many as 10 G1 winners among his 50+ career stakes winners (good for 6% of his foals aged 3 and up), and who's 1.47 AEI is greater than his 1.33 CI, meaning he moves his mares up.  Although the "nick rating" for this particular pairing is 'only' average, there is actually much more to like about this breeding:  firstly, there are 6 foals by Include or his sire Broad Brush and out of mares by Two Punch, 5 of which have run and all of those have won a race, with average earnings of more than $50,000.  Taking a step back, all the sons of Broad Brush have produced a total of 22 foals out of mares by Two Punch, 19 of which have run, 18 of which have won, including a black-type winner (good for 4.5% from foals) -- and although he doesn't qualify as a "black-type winner" for these statistics, Champion and Hall of Fame Steeplechaser Good Night Shirt is bred on this specific pattern as well.  In addition, Miss Charlotte's second dam, Herecomesbetty, is very closely related to a mare called Betty's Solutions (both are out of Betty Lobelia, one by Cox's Ridge and the other by one of his sons), and Betty's Solutions is the dam of Include's Grade 1 winner Include Betty.  Betty Lobelia, meanwhile, is a half-sister to the dam of Grade 2 winner Best of Luck, who is by Include's sire Broad Brush.  So this female family has had success already with Include and his sire-line, which we always strive to achieve in our mating plans.

After she delivers her Maryland-bred Include foal in March at St. Omer's Farm, the plan is to send Miss Charlotte to Kentucky to be covered by the Grade 1-winning 2YO and Met Mile victor Mor Spirit, which is a mating that will produce a foal who is very closely-related to the multiple Grade 3 winner and Grade 1-placed Eskenformoney (by Mor Spirit's sire Eskendereya, out of a half-sister to Miss Charlotte's dam Petunia).  Multiple stakes winner Somethinaboutbetty and Grade 1 winner My Trusty Cat are both also from this immediate female family and by Storm Cat-line stallions like Mor Spirit, so that makes this mating much more interesting than the "C+" nick rating would otherwise suggest (and is yet another demonstration of the shortcomings of nicks as a determinative factor in planning matings). 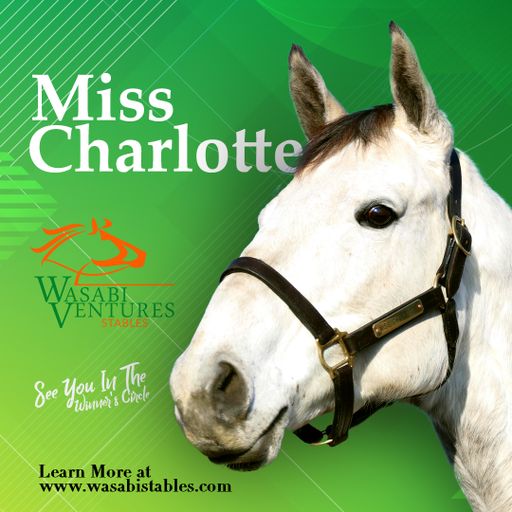 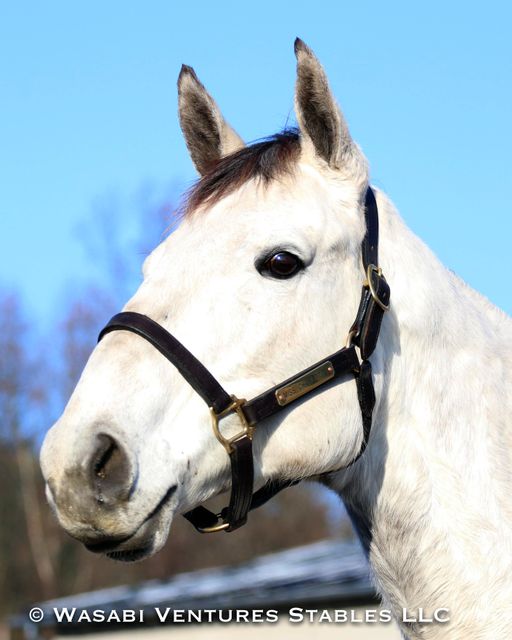 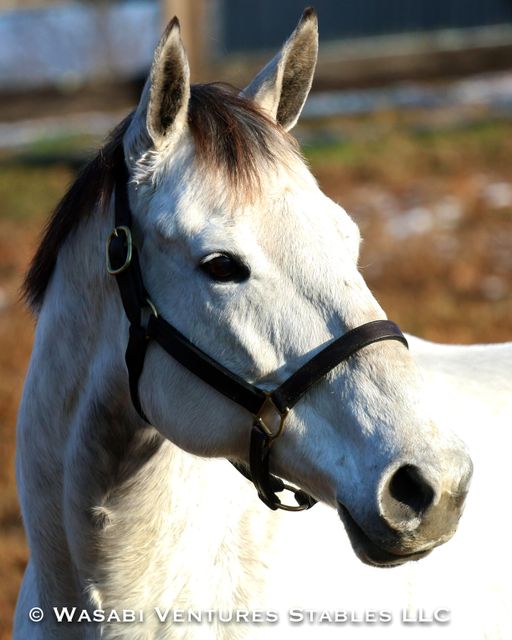 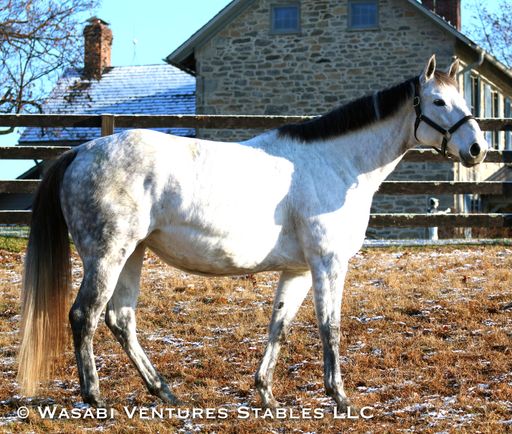 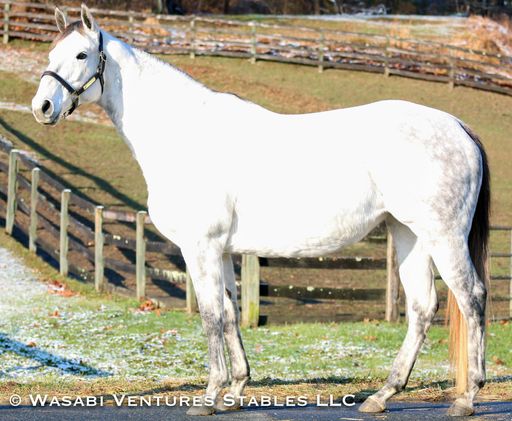 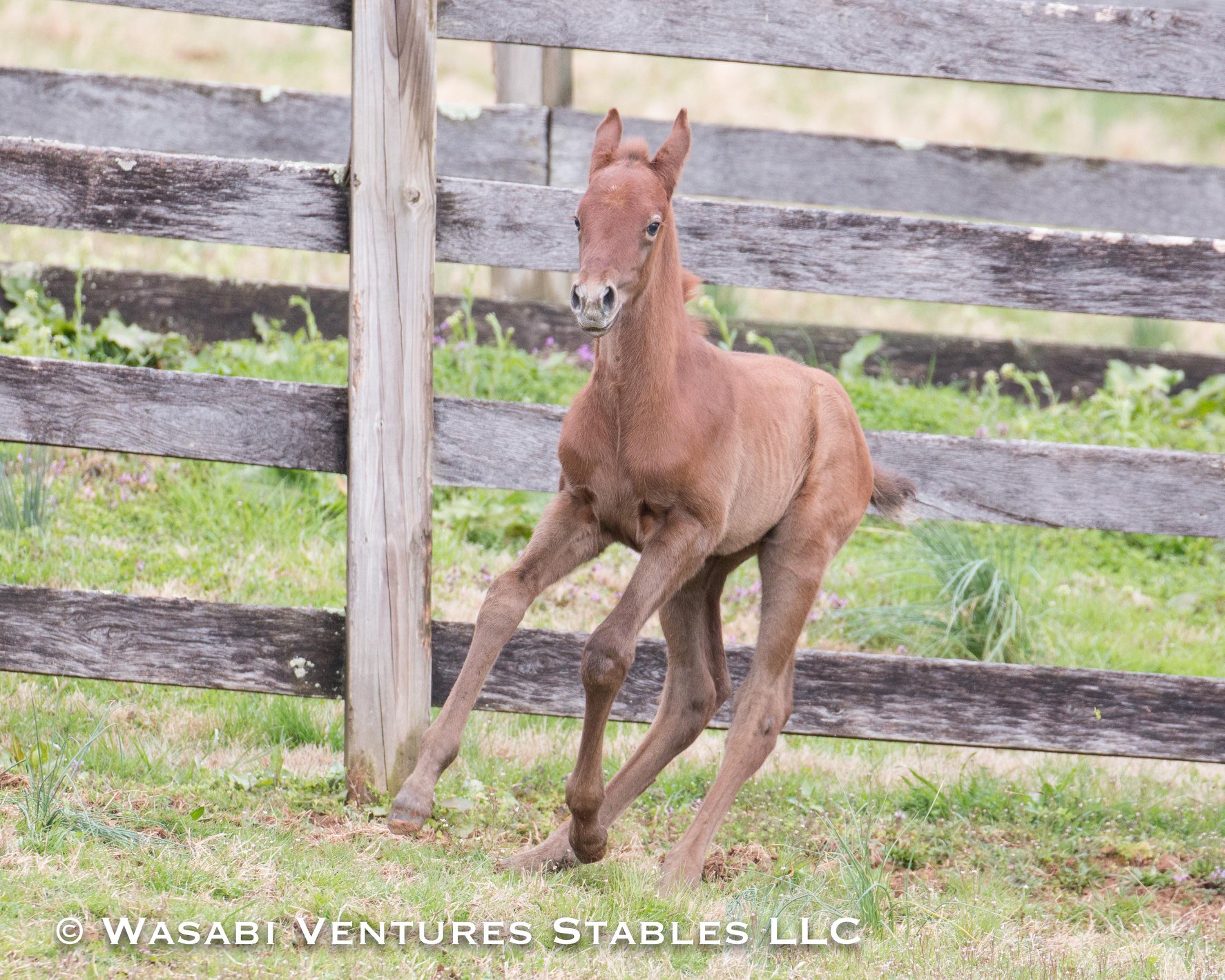 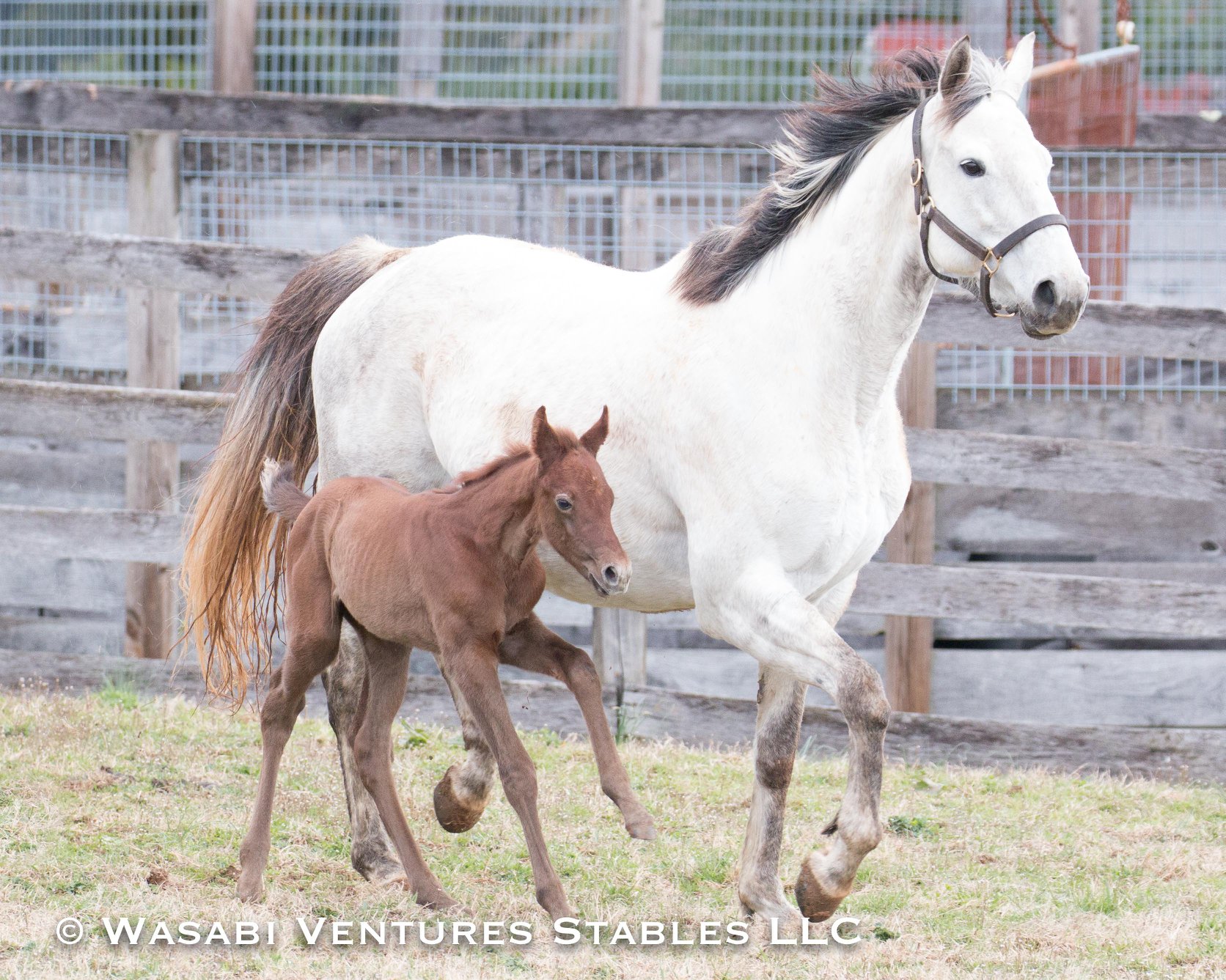 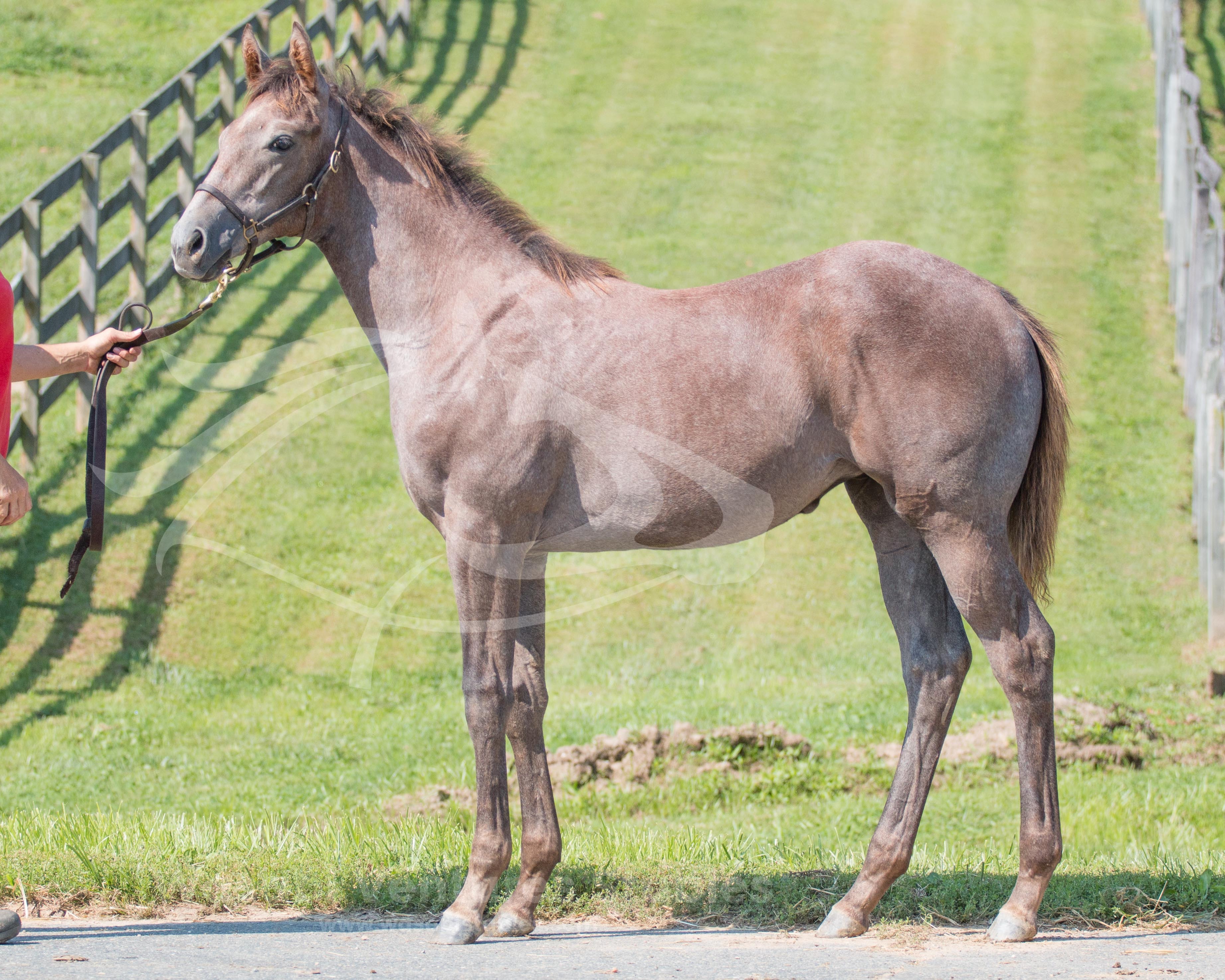 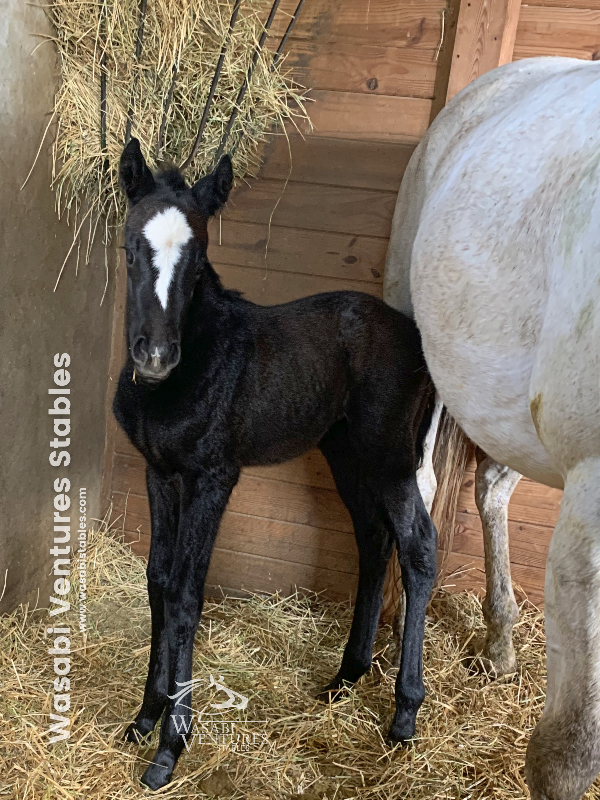 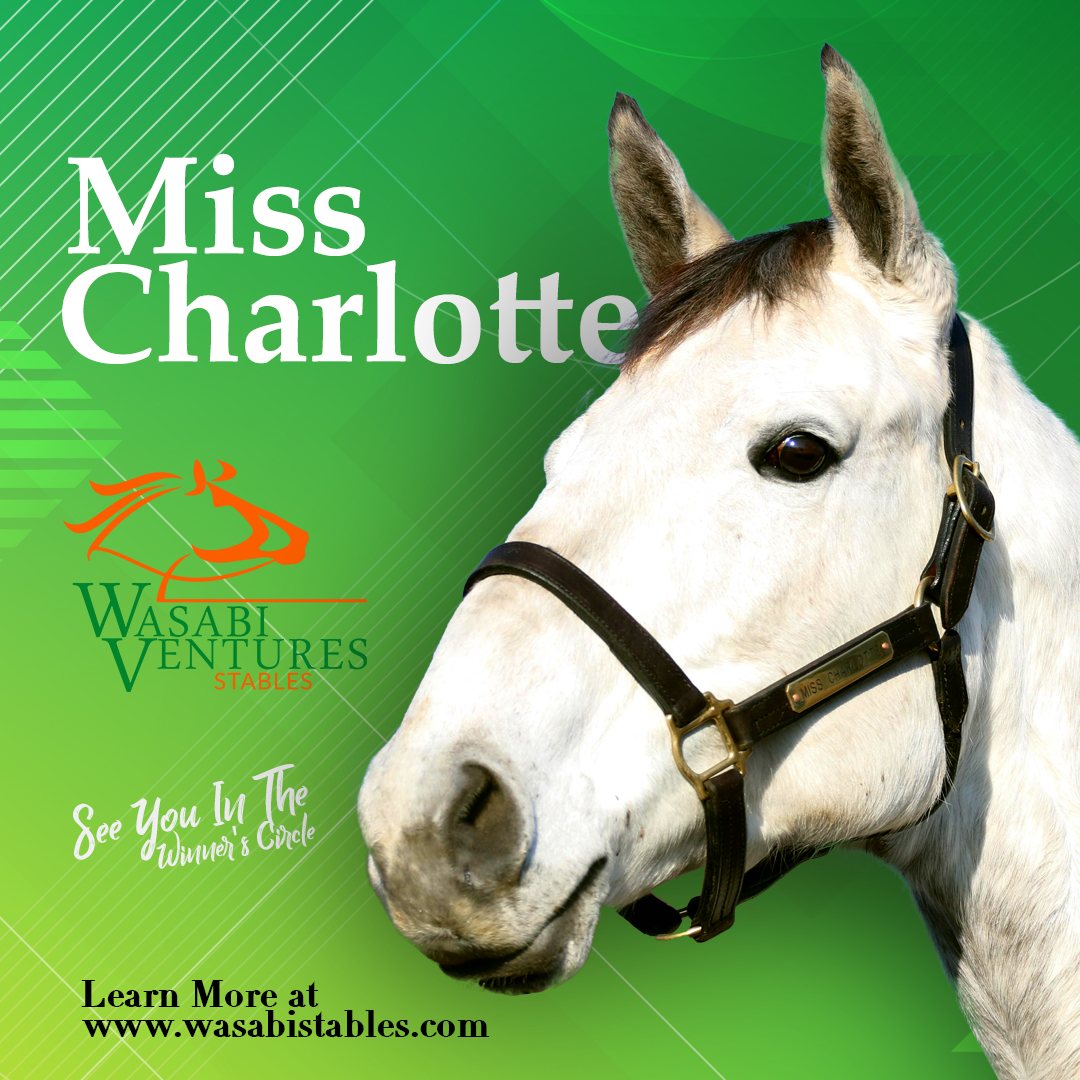 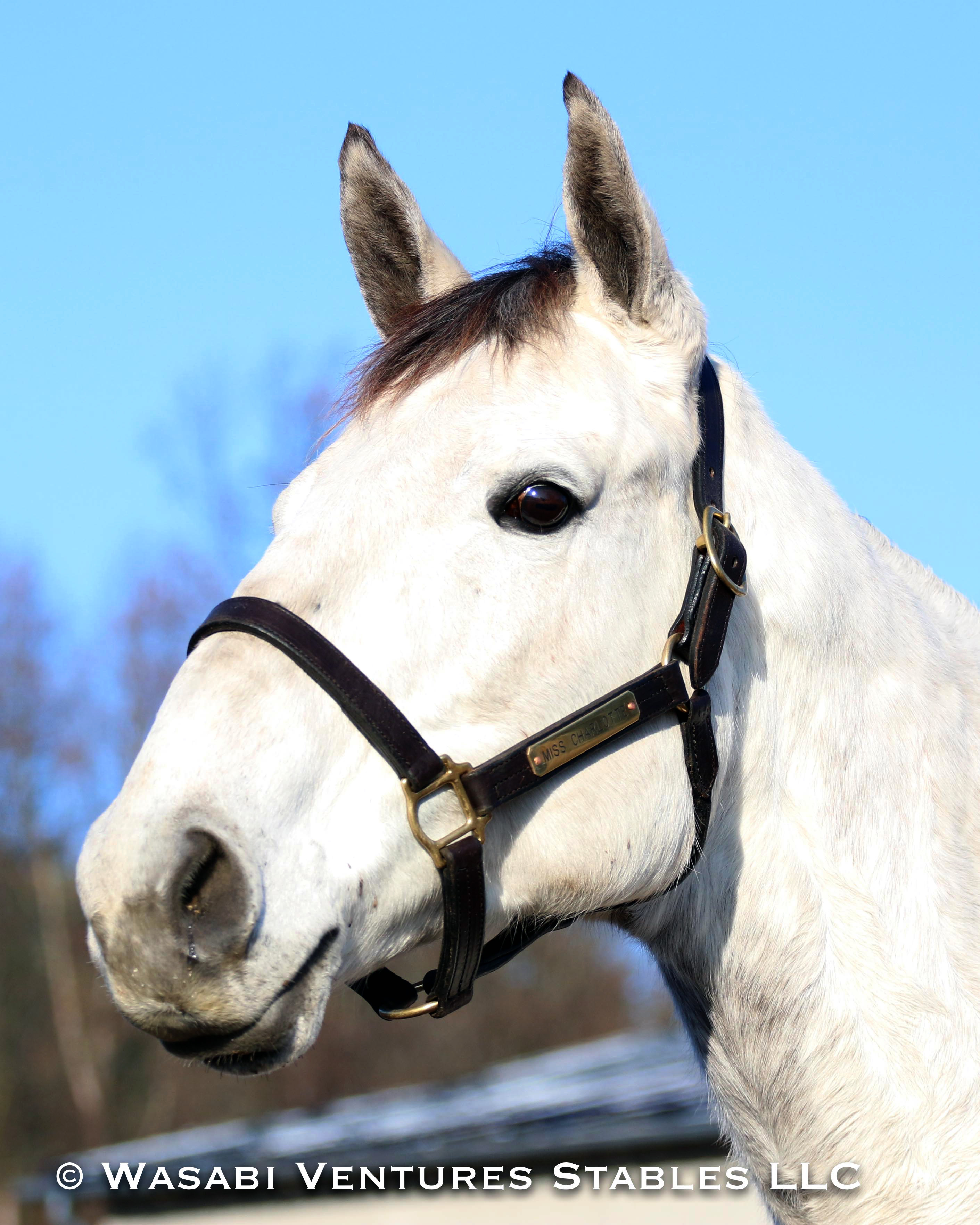 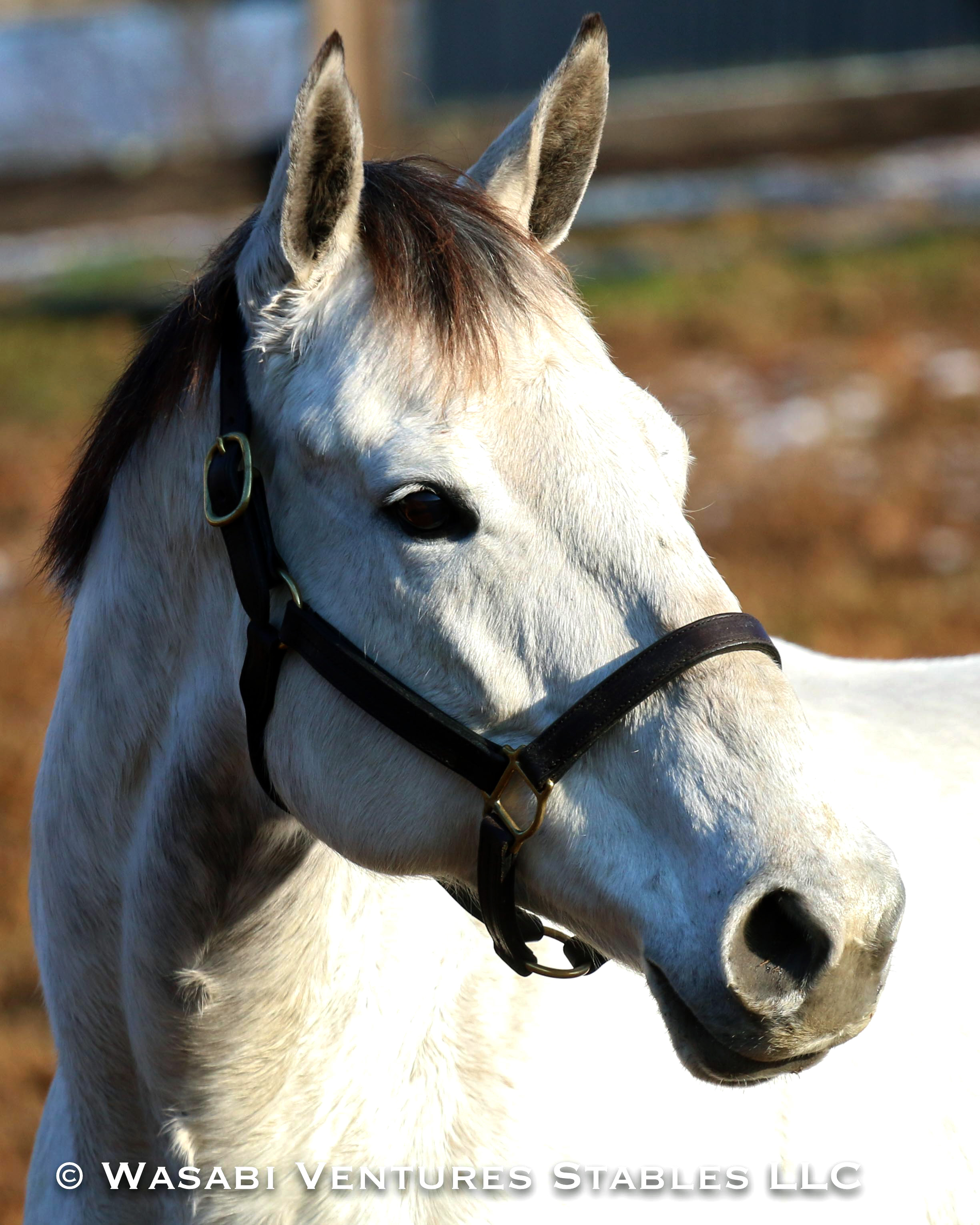 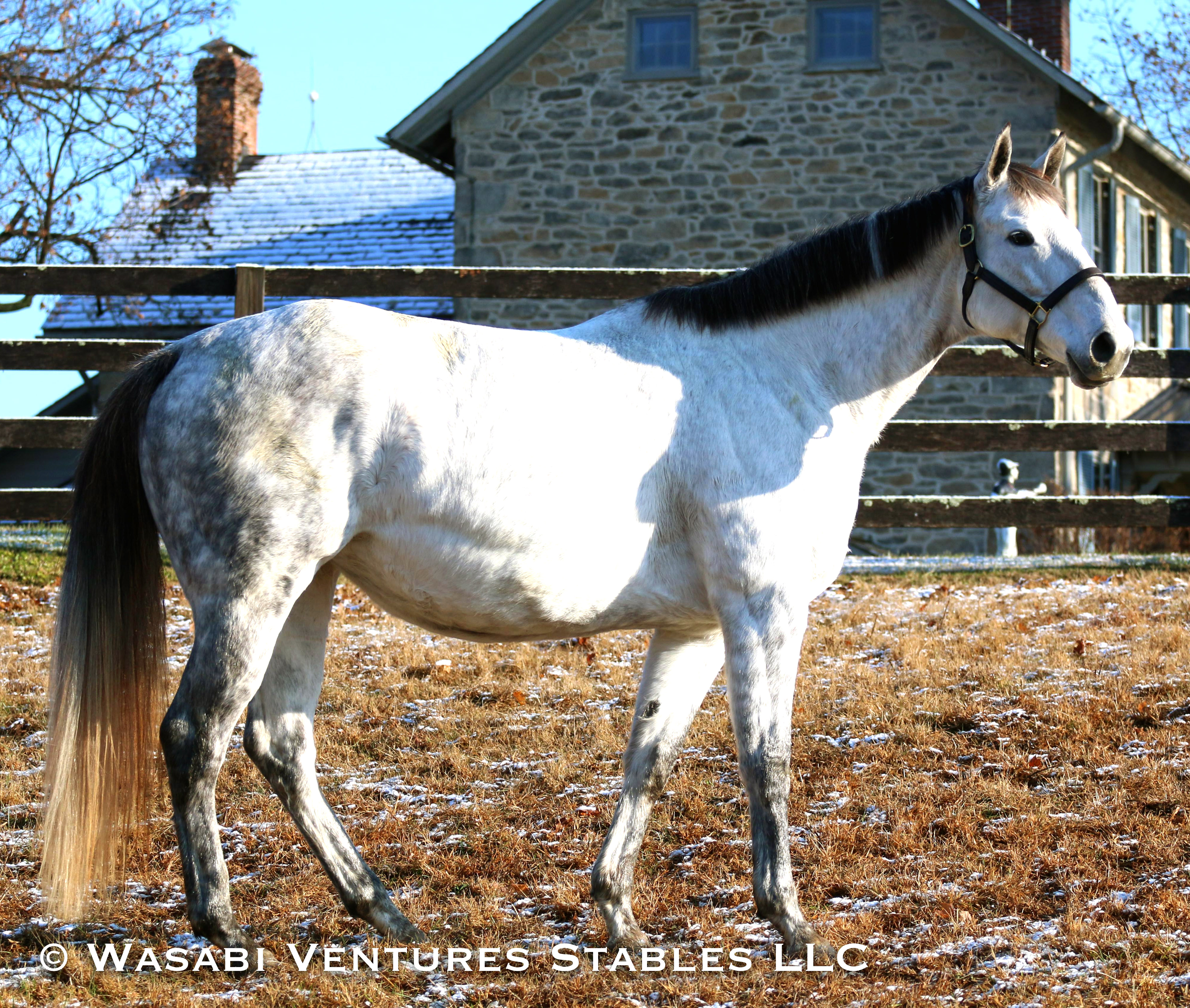 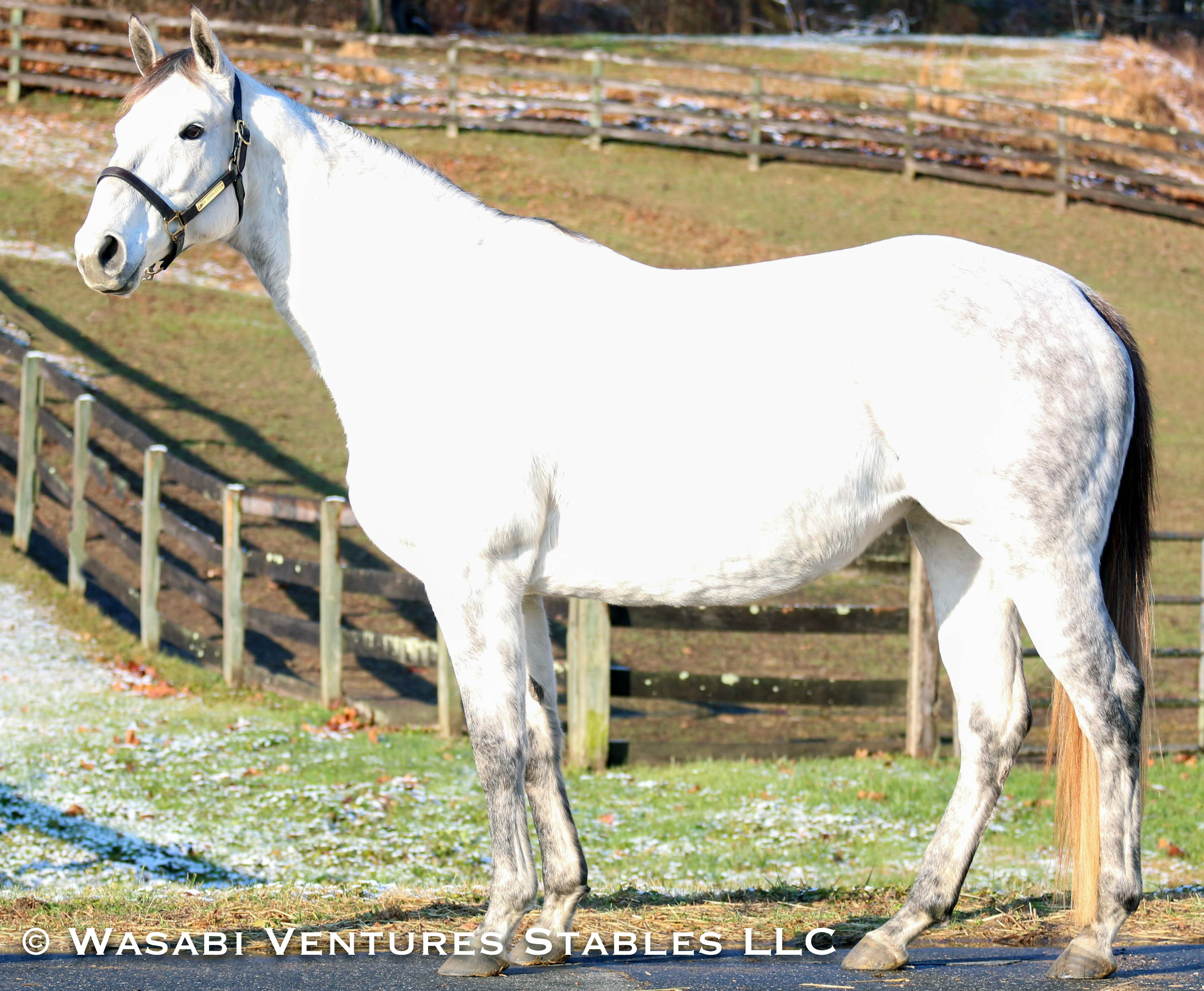